By now, you've probably heard that the Liberals have essentially lost their seat edge. How did we get here? It's time for another trends post! As usual, all numbers in this post reflect my turnout adjustment of CON +1.5, LIB +0.5, NDP -1, GRN -1. 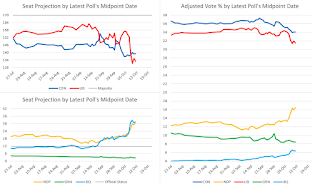 Methodological note: The data points for September 26 and October 3 are not plotted: each of those dates was the midpoint of only one public poll (Nanos tracker), making those projections less reliable given that discounting has become very aggressive. October 11 would also fall into this category, but I've plotted it since it's the last date available.

1. Both the Liberals and the Conservatives have lost over 3 points from their campaign highs, which occurred just before "blackface" for the Grits and just after it for the Tories.
- For the Conservatives, the fall happened in three phases: coming off the immediate post-blackface high, Andrew Scheer's rough week with resume-gate and dual-citizenship-hypocrisy-gate, and then the debates.
- For the Liberals, "blackface" cost about 1.5 points on impact, but the Scheer pre-debate struggles helped them recover a good chunk of the lost ground. However, Jagmeet Singh's good performance in Monday's English language debate proved even more costly than "blackface" for the Liberals: around 2 points and 20 seats lost, essentially overnight.
- For both parties, the situation may be stabilizing, but the truth is that after an avalanche of polls with an Oct. 9 midpoint date, there were few with an Oct. 10 or Oct. 11 one. So the stabilization you see on the graphs is very preliminary, and may be a mirage.

2. The NDP had been creeping up throughout the campaign, but was mostly just regaining the ground lost during its disastrous pre-writ period. What has happened since the English debate, however, is another story: an impressive 3-point jump essentially overnight, drawing from both the Liberals and Tories.
- As many have mentioned, trends starting at this point in the campaign just amplified in the final week in 2011 and 2015. However, there is a crucial difference from 2011 and 2015: back then, the party heading up (NDP in 2011, Liberals in 2015) gained a lead over their main competitor, so strategic voting may have taken care of the rest. This time, the NDP remains well behind the Liberals, so strategic considerations would act in the opposite direction in most of ON, QC and parts of other provinces. This makes the trajectory of the final week very unpredictable.

3. The BQ's trend has been quite similar to the NDP's, and the seat projections for them have been essentially identical for the past 3 weeks.
- In the BQ's case, there is no strategic consideration that would cause its recently acquired supporters to turn away in the final week. Therefore, I would rate the odds of a significant pull back to be lower for the BQ than the NDP. However, the BQ is in a zone where its seat projection is very sensitive to its vote share, so even a minor pullback could push it back well below 30 seats.

4. If you have been following my "Trends" posts, you've probably noticed that I have consistently been bearish on the Greens, who keep heading down except during major external events (NDP pre-writ losses, "blackface," Greta's protests). Well, the past week has done nothing to change that: despite the big Liberal drop, the Greens are flat, possibly with any gains offset by losses to the NDP. Worse, the NDP is the Greens' main competitor in their Vancouver Island targets. Perhaps there will be some local effect that allows the Greens to nevertheless make several gains on the Island, but both the Esquimalt--Saanich--Sooke seat poll by Mainstreet and the September sub-BC breakdown by Insights West suggest nothing of the sort. The Greens are even at risk of falling short of their 2008 vote share!

There will be a final trends post next weekend, and possibly one mid-week if developments warrant it. Buckle up - this could be a wild ride!


*Changes made on or after Sept. 25 are only reflected back to the start of the campaign (Sept. 11). These include the re-weighting of standalone regional polls (i.e. regional numbers not part of a national poll), the Guilbeault baseline adjustment in Laurier--Sainte-Marie and fixing an old spreadsheet error. These only make a barely visible (if at all) difference on the graphs.
Posted by Election Watcher at 19:14