IRG's newest poll (with the Ad-testing methodology that seems less Liberal friendly than IRG's methodology for other polls) shows little movement nationally. There are two interesting tidbits in this poll. First, the Liberals are shown with a lead in BC that is more than marginal; this is more evidence of the Tories' recent struggles there. Second, the Bloc is up only marginally in QC (where the poll oversampled), so IRG is in the camp of "TVA debate had little impact on the Bloc" along with Abacus and Nanos (and unlike Ipsos and Mainstreet).

Both these polls had little impact on the aggregate projection.

The only seat lead changes are in BC. Note that 6 of the 7 Vancouver Island ridings (all except Elizabeth May's) are within 6%...

Seats changing hands since the last projection:
- In BC, LIBs get Steveston--Richmond East back from CONs.
- In BC, GRNs regain Esquimalt--Saanich--Sooke from the NDP. 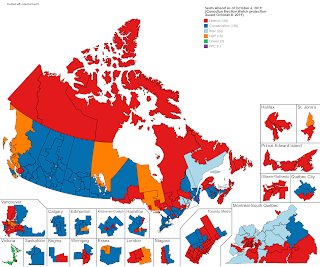 Posted by Election Watcher at 12:56