The Abacus poll shows only a modest NDP rise, and the Bloc increase is also smaller than in other polls, allowing the Liberals to keep a 12-point lead in QC. The Liberals fall into a tie with the Tories, but because the model already priced that in and because the Liberals actually expand their lead in ON, adding this poll was mildly positive for the Liberals.

The Nanos poll shows a considerable NDP increase and Liberal drop. This was likely mostly due to dropping Oct. 9, when I estimate Nanos still had the NDP in the mid-teens and the Liberals in the mid-thirties. It actually looks like Oct. 12 was not as good as Oct. 11 for the NDP (guess is 19% vs. 21%), so perhaps things are stabilizing. Of course, that could change again as Canadian gather for Thanksgiving...

But wait, there's more: Nanos' public PDF had the regional figures today! We see that Nanos still has a 10-point lead for the Liberals in ON. As a result, the addition of the Nanos poll is only mildly negative for the Liberals. The Grits come out marginally ahead considering both polls added, even though they trail by slightly more in the popular vote. The Bloc is down about a seat, while the Tories and NDP are flat.

Both these polls confirm that the NDP has vaulted ahead of the Greens in Atlantic Canada, and that BC is a three-way race with the Greens some distance behind. 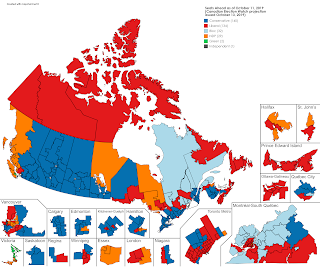 Posted by Election Watcher at 06:21