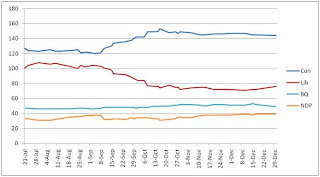 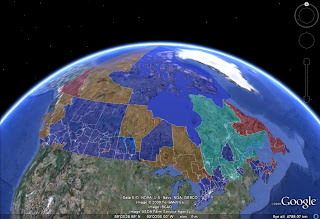 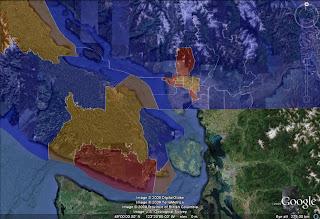 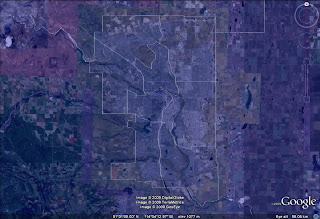 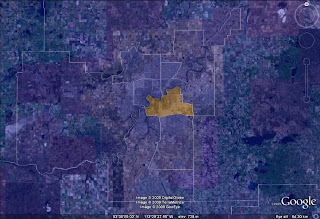 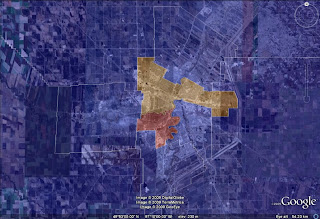 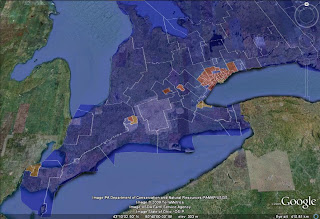 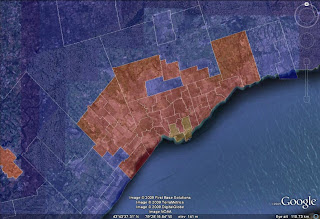 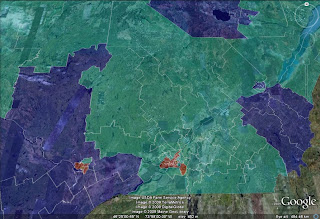 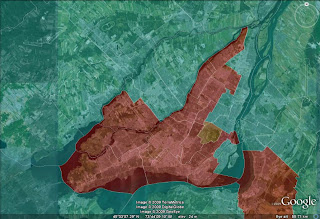 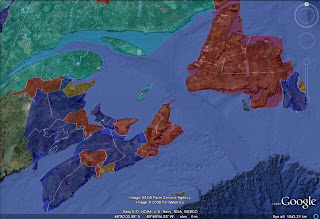 I've been too lazy to map the projections that I've been making, but I thought that it'd be nice to visualize the state of things at the end of the year. So here it is: the second mapped projection of Canadian Election Watch!
Posted by Election Watcher at 11:20 No comments:

Comparing the Latest Projection to the 2008 Results

So where are we 14.5 months after the last federal election? Lots of things have happened: a parliamentary crisis with threat of coalition and, ultimately, a controversial prorogation; a new Liberal leader, his honeymoon through the spring and great fall in, well, the fall; the biggest federal deficit in history (though this is misleading since it's only true not taking into account inflation and economic growth); the NDP deciding to temporarily support the government; the Afghan detainee scandal; and Canada's declining reputation internationally due to the climate change issue.

It seems, though, that in terms of voting intentions, these have pretty much all canceled out. Here are the seat changes from the 2008 election (counting André Arthur and Bill Casey as Conservatives) to the most recent projection:

So essentially, we're back where we were on Election Night 2008. It doesn't get much more exciting when you break it down by region either:

British Columbia: This is the region, along with Atlantic Canada, where there has been the most movement, but that's not saying much. Conservatives are on -3, with Liberals gaining 1 and NDPers gaining 2. Stéphane Dion's departure (Dion being extremely unpopular in BC) and the HST probably explain these changes.

Prairies and North: Nothing. Kind of fitting for this region, no?

Ontario: NDP loses 1 seat, while Liberals gain 1. Out of 106 seats, that's essentially no change as well.

Atlantic Canada: Tories gain 3, NDP gains 1, while Liberals lose 4. These changes are significant, and the Tories now lead the seat count there (but just barely). One explanation is that Dion was not being horribly unpopular there. Also, Atlantic Canada seems to react a bit more slowly than the rest of Canada to political developments (again fitting: as they say in French, une heure plus tard dans les Maritimes), so one can speculate that while the Grits have marginally picked up in the rest of the country, they are still at their November lows in the Atlantic provinces. Remember that when Ontario swung to the Tories in September, Atlantic Canada held good for the Liberals, only to then swing in October.

What will happen in 2010? My humble guess is that the Liberals will recover somewhat from their lows this Fall. But I don't think that they will retake the lead from the Conservatives before an election campaign. Of course, once a campaign is underway - which may or may not happen in 2010 - all bets are off!
Posted by Election Watcher at 10:05 No comments:

Nanos released today its December voting intentions poll. This one was actually conducted around the same time as the EKOS and Angus polls reported in the last two posts, and the most recent day of polling included is still EKOS' December 15.

Nanos' poll has some interesting results: it shows the NDP first in Atlantic Canada (essentially tied with the Tories, and a few points ahead of the Grits, who should be worried there), the Liberals within 3 points of the Bloc in Québec and ahead of the Tories in Ontario, and the Conservatives with a very strong lead in BC (and of course in the Prairies too, though that's not "interesting").

This poll is a good one for the Liberals: while it has them still 9.3% behind the Tories, it's the first poll since the first week of September to show the Grits above 30% nationally (a few more polls in September, as well as Nanos' October, had them at 30%). More importantly, those gains have disproportionately (read: almost all) come from the electorally fertile Ontario and Québec. The Liberals therefore end the year on an upward trend in the aggregate projection, though still at a low level:

New EKOS, and Other Polls

Here is a new EKOS poll done over the past week. Not much movement was recorded, but including this poll did influence some marginal projections.

There was also a Manitoba poll done by Probe Research (props to ThreeHundredEight.com for finding it) that confirms the status quo there. Finally, some media have been reporting the national and Québec result of a Harris-Decima poll, but I will wait until more regionals are reported before including that poll in my projection.

So the new aggregate count is:

Angus Reid provides us with our first non-EKOS national poll in 3 weeks. Compared with the last two EKOS polls:

- The Tories are doing better in BC, which usually happens when comparing Angus Reid polls to EKOS polls. Also, their Québec result is similar to the one in the latest EKOS poll, which is 5 points lower than in previous polling. Copenhagen?

- The Liberals are doing better in Atlantic Canada, Québec (picking up votes from the Tory drop?) and Alberta (useless).

- No significant change for the NDP.

- The Greens are way down, but again that's probably due to the different polling methods of EKOS and Angus Reid. The only two pollsters that tend to produce reliable results for the Greens are Nanos and Angus, and both have them at just 6% nationally in their latest poll.

In terms of seats, the Liberals retake the seat they lost to the NDP in the last update, and the Conservative drop in Québec makes them lose two seats to the Bloc. Thus:

The first national poll in two weeks is out, and it is... completely underwhelming. Basically, nothing changed. Due to the scarcity of polls lately, this one was weighed almost 50% in my projection. But despite half the inputs being new, the only change was in Newfoundland and Labrador, where the Grits lose a seat to the dippers. So the new totals are:

This is a new low for the Liberals, and a new high for the NDP. This trend is unlikely to persist, however: the Liberals simply don't have much room left to slide, and the NDP is really milking out every possible seat in this projection, given that their national numbers are actually still below where they were in the 2008 election.
Posted by Election Watcher at 07:13 No comments: