Update Sept. 1: The trends now reflect the EKOS poll released Sept. 1, which has the same field dates as the Léger poll released Aug. 31.

Below are the projection trends since the first projection issued in early August. The plots show how the projection would have evolved with the current model, had the polls been released in the order in which they were conducted. This means that the seat counts are recalculated when an older poll is published after a newer one, or when I tweak the methodology. The result is not quite the same as the retroactive best guess at what the situation was at the time (since I don't use the subsequent data to "backcast" how things were), but it's closer than just plotting projections as they're issued, as most other sites do.

Details for how these trends were generated are given at the end of the post. 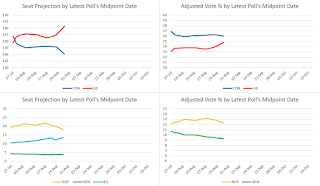 The trends show the following evolution in late July and August:

- The CONs lost their seat lead in late July, and were remarkably flat around 145 seats and 36% support during most of August. The latest EKOS ON numbers and Léger national polls, however, ended this period of stability. It will be interesting to see whether this sticks, like the drop in late July.

- The LIBs have generally been in the 33-34% range and in the low-to-mid 150s in terms of seats. The Dion report had no discernible effect. The latest EKOS ON numbers and Léger polls pushed them above 34% and to nearly 160 seats for the first time. Again, it will be interesting to see if this rise is confirmed or is just a blip.

- The NDP has been flat around 20 seats and 13% support. But don't let the flat trend fool you: there is wide disagreement among pollsters regarding where the NDP is. Update: Also, although the monthly trend is flat, it will be interesting to see if the drop in the past two weeks continues.

- The BQ has quietly made some gains, passing the critical threshold of 12 seats. However, whether it would, in fact, win 12 or more seats remains essentially a coin flip. Many BQ races, both projected wins and losses, are very tight, so the uncertainty is very large relative to the seat count.

- The GRNs have been quietly fading in terms of vote share, for example falling to fourth place in BC. Remember that in 2015, the NDP was riding high during the summer thanks in part to Rachel Notley's win in AB, only to be sorely disappointed in the fall. Does the same fate await the Greens after encouraging results in recent provincial elections? Or do they manage to leverage Elizabeth May's popularity and eat into the Liberal/NDP vote, thereby earning the balance of power (or causing a Conservative majority)?

Going forward, I plan to update trends every week or two.

Here are some methodological details for these trends:

- The dates correspond to the midpoint of the most recent poll in the projection. Polls with midpoint dates within a day or two may be grouped. For example, there are Abacus and DART polls with a midpoint date of Aug. 16.5, and Léger and Ipsos polls with a midpoint date of Aug. 17.5. All of them are first included at the Aug. 17 point.
- Methodological updates (e.g. change in turnout adjustment) and adjustments to ridings identified as special cases lead to recalculations (even if those adjustments informed by subsequent polls, as long as those polls likely mainly reflect things baked in before the first projection). Poll-based adjustments to other ridings or to sub-regions do not lead to recalculations, as they may reflect actual evolution of the situation.
- Regional, sub-regional and riding-level polls are included in the numbers at the same time as the nearest national poll (except, as mentioned above, for certain polls in special-case ridings). For example, the Corbett ON poll with a midpoint date of August 12 begins to be included at the August 11 point, as the nearest subsequent national poll has a midpoint date of August 16.5.
Posted by Election Watcher at 23:12