Where did we stand before the English debate, and what appears to be the early impact of the TVA debate? It's time for another trends post! As usual, all numbers in this post reflect my turnout adjustment of CON +1.5, LIB +0.5, NDP -1, GRN -1. 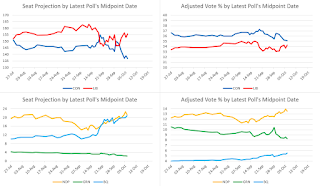 Methodological note: The data points for September 26 and October 3 are not plotted: each of those dates was the midpoint of only one public poll (Nanos tracker), making those projections less reliable given that discounting has become very aggressive.

- The most consequential thing to note is that the Tories appear to have lost some ground. After being consistently between 36% and 37% for months, they have now slipped to around 35%. Of course, the magnitude of the change is small, and it may be reversed in the coming days. However, Andrew Scheer must be hoping that this is not the start of a new trend that sees Conservative support reach its 2015 levels outside Atlantic Canada (when it was abnormally low) and the Prairies (where more Tory votes don't bring many seats).

- The Liberals have not recovered all the ground lost in the wake of "blackface," but they are back to their consistent August level of around 34%. Thanks to the Tories' small fall, the popular vote gap has shrunk to its lowest level. In fact, without the turnout adjustment, the Liberals are marginally ahead of the Tories.

- The NDP has been slowly but steadily gaining ground since the start of the campaign, and is now exceeding its August level in popular support. Will Jagmeet Singh's performance at the debate further the momentum? Or will the NDP start suffering from strategic voting as Election Day nears?

- The Bloc has also gained ground, though the gains have not been steady as the NDP's. The TVA debate seems to have helped the Bloc achieve further gains, although the size of those gains remains unclear.

- The NDP and Bloc gaining a combined 15-20 seats has increased the odds of a minority government, though a majority remains very much within reach, especially for the Liberals.

- The Greens are on a long-running gentle downward trend. Three events broke that trend: the NDP's decline in the late August, "blackface," and the climate march. However, after each of these, the Greens fell back to the almost straight line downward track that has prevailed since late July.


Now my two cents on the debate:

- Singh had a good first half of the debate, with several zingers, the most memorable of which were about the Liberal government dragging indigenous children to court while trying to spare SNC Lavalin, and about Mr. Deny vs. Mr. Delay. Much like in the Maclean's debate, Singh faded in the second half of the debate, but the first impression is often what matters. Moreover, Singh remained very human and personable all the way through. If strategic voting does not occur - a HUGE if - Singh has probably done enough to maintain the NDP's positive trend.

- Scheer was likely way too aggressive in his first answer, not at all addressing the question (as pointed out by May, who followed him) and immediately going off topic and attacking Trudeau. After that, he seemed to have a mostly neutral performance - certainly much better than the one he put in at the TVA debate last week. Moreover, Bernier was very ineffective - even inexplicably forgetting to mention supply management during the affordability segment - so it does not look likely that the Tories would bleed much support to the PPC. Overall, this may have been enough to nip the Tory negative trend in the bud, if only because it changes the channel away from a rough week for the Conservative campaign.

- May had a fairly typical performance. She came off as idealistic, both in a good and a bad way. She kept hammering on the carbon reduction target, but voters wanting to learn more about the Green plan to assess its content were probably left on their appetite. Singh's good performance is also a problem for May.

- Trudeau did not fare terribly, but this was not his best night. His inability to respond to some of Singh's attacks because it wasn't his turn to talk may hurt him. Going after Singh for refusing to intervene in the Bill 21 court case may come back to bite him in QC. His line about getting 3/4 of the way to the GHG emissions target was not only misleading (like many claims by other leaders), but also non-credible. This may blunt the effectiveness of his obvious attempt to rally left-of-centre voters around him over the issue of climate change. On the other hand, the general cacophony of the debate would likely limit any damage, and the left-of-centre vote may yet consolidate around the Liberals when the dust settles and minds focus.

- Blanchet's criticism of the Canadian government for arresting Meng Wanzhou was interesting. Otherwise, he often spoke too slowly given the limited time, and probably did not come off as sympathetic as Duceppe did in some previous English-language debates.


*Changes made on or after Sept. 25 are only reflected back to the start of the campaign (Sept. 11). These include the re-weighting of standalone regional polls (i.e. regional numbers not part of a national poll), the Guilbeault baseline adjustment in Laurier--Sainte-Marie and fixing an old spreadsheet error. These only make a barely visible (if at all) difference on the graphs.
Posted by Election Watcher at 18:35