The following poll has been added to the model:
Mainstreet's 10/1-3 national poll (national results only; current weight among national polls: 35%)
For a full list of included polls, see previous Projection posts.

Just like the Nanos tracker, the Mainstreet tracker shifted heavily toward the Tories three days ago, and now has shifted back with the 9/30 sample being dropped. This again moves the projection toward the Liberals, but not by that much because the model was expecting most of this shift back due to Nanos' move this morning and to Mainstreet's past Liberal lean.

(It does appear that Mainstreet's Liberal lean has in large part disappeared since "blackface." The model slowly reflects this as the negative weight on past polls is increasing applied to more recent, less Liberal-leaning polls. However, if there has been a behind-the-scenes methodology change at Mainstreet, the model would be reflecting this too slowly.)

There was little movement for the other parties.

Seat changing hands since the last projection:
- In ON, LIBs get Vaughan--Woodbridge back from CONs. 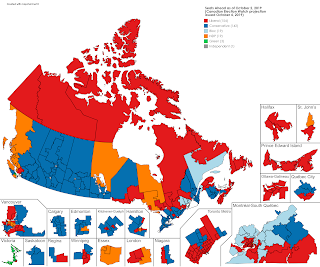 Posted by Election Watcher at 12:20