The writs have been issued! Now is a good time to take a look back at the pre-campaign period, especially since we got many older pieces of data in the past few days, such as Nanos 4-week polls, two EKOS July regional breakdowns, a MQO NS poll, etc.

For new readers: these trends are different - and I would say more meaningful - than the ones you might see elsewhere, since they are retroactively recomputed when old data becomes available. Thus, my "Trends" posts avoid showing "fake" variations caused by polls coming out with different lags. More details were provided in the first instalment of this series. 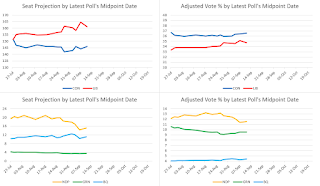 Here are my takeaways:

- The Conservatives have basically not moved at all since late July. At all 13 14 points at which a polling average was computed, they got between 35.9% and 36.7 37.0 36.7%. This is quite striking, as the sample has effectively been renewed 1.5 times. Accordingly, their seat count has consistently been around 145. What looked like a late-August drop in the previous "Trends" post proved to be a blip. It will be interesting to see if the latest bump also ends up being a blip. Well, it didn't take long for the DART poll to mostly eliminate the bump.

- The Liberals have been on an upward trend, gaining almost 2 about 1.5 points since late July. Adding the older data did not affect the conclusion that the Dion report had no apparent impact on Liberal support - it came smack in the middle of the period of Liberal stability in the first 3-4 weeks of August. The size of the Liberal gains in the past two weeks is uncertain, especially in terms of seats: as you can see, the projection has become less stable recently due to some pollster disagreements.

- The NDP was pretty flat during most of August: around 20 seats and 12-13%. However, it has dropped rather quickly in the past two weeks, which probably explains the steeper Liberal increase during this time. Will it be able to recover? And remember that things might actually be much worse than what the model is showing.

- The Bloc's trend is interesting. The previous instalment showed the Bloc gaining, but as it turns out, adding the retroactive data erased most of that trend - it probably wasn't real. What remained of it was wiped out by the latest Mainstreet poll, so the Bloc is back where it was in late July - around 10 seats.

- Finally, the Green trends are interesting too: as the previous instalment showed, it had been on a gentle month-long slide in August. In terms of voting intentions, that appears to have stopped in the past two weeks, and the party may even have regained some of the lost ground; this could be thanks to the NDP's struggles. However, while the seat projection has continued to drop stopped dropping, it has not turned up either, as the Greens' numbers in BC and Atlantic Canada, their most promising regions, continue to be unimpressive.

This will be an exciting campaign for many reasons. Just focusing on seats and vote shares:

1. Things are very tight between the top two parties. A 20-seat swing between them corresponds to only about a 2-point swing, which is well within the range of aggregate polling errors and potential turnout effects. Thus, even if the election were today, the outcome would be highly uncertain. And as we've seen many times, the Canadian electorate can be extremely volatile.

2. The Liberals appear to have a large map advantage: they have been consistently behind in the vote projection, but ahead in the seat projection. We may end up with a split outcome, and there's even a small chance of a Liberal majority while the Tories win the vote count. This (majority while losing vote count) has happened only once in a Canadian federal election, and it was in 1896.

3. There are two races for third place: NDP/BQ for seats, and NDP/GRN for vote share.

4. The NDP and the BQ happen to be right around the crucial 12-seat threshold for official party status. Moreover, neither of them has many very safe seats, so a near wipeout is a real possibility for both (the BQ has already experienced that in 2011).

So buckle up, and follow along!
Posted by Election Watcher at 15:45