The following poll has been added to the model:
Mainstreet's 9/18-20 national poll (national results only; current weight among national polls: 36%)
For a full list of included polls, see previous Projection posts.

Mainstreet, like Nanos did this morning, also sees a drop in Liberal support. However, because the drop is smaller and adding this poll reduces the weight on recent Nanos polls slightly, the projection is only marginally affected.

Seat changing hands since the last projection:
- In QC, the BQ gains Salaberry--Suroît from LIBs.

Given all the changes in the past 24 hours, it's time for a new map: 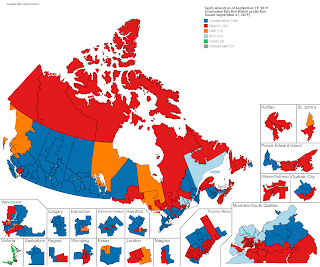 Posted by Election Watcher at 12:19