What was the effect of "blackface," and what has happened to voting intentions in its aftermath? It's time for another trends post! As usual, all numbers in this post reflect my turnout adjustment of CON +1.5, LIB +0.5, NDP -1, GRN -1. 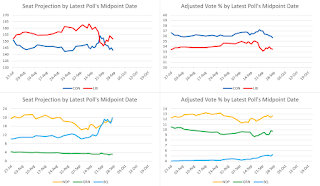 We finally see some movement!

- The Liberals lost 1.5-2 points in the immediate aftermath of "blackface." A modest recovery has occurred, but they are still about 1 point short of where they were before the revelations.

- Right after "blackface," the Tories saw a modest rise in popular support - so small that it might have been just noise. Nevertheless, the Liberal fall helped them briefly gain a tiny seat lead (though this would not have happened without the turnout adjustment). Conservative gains, whether real or due to statistical noise, have been entirely erased, and Scheer's party is now at its lowest popular vote support (and near its lowest seat projection) since my projections started.

- The Liberal seat lead in the past 3 days has hovered around 10. That is tiny: with these numbers, the Tories would have a 40% chance of winning the most seats in an election today. For the actual election, it's almost 50:50.

- The NDP has been steadily regaining the ground lost during the pre-writs period, and the recovery is now almost complete.

- Despite the NDP's gains, it has marginally fallen into fourth place in the seat projection due to the Bloc's abrupt rise post-"blackface."

- Both the NDP and the Bloc have extremely few safe seats, so despite them flirting with the 20-seat bar in the projection, they are both still in danger of not reaching the requisite 12 for official party status.

- The Greens gain when there are external events: NDP's pre-writs struggles, "blackface" and the climate strike. However, the intervening drops mean that they are still below their July levels.

Quite remarkably, comparing the latest numbers to the August 11 ones, we see that all four national parties are down marginally both in seats and in popular support - only the Bloc is up. This is a sign that Canadians are not drawn to any of the choices, and greater numbers of those that have the option of a palatable and meaningful protest vote (Quebecers) are choosing it.

Why is this happening? As I have commented on Twitter, I believe that all four parties' platforms are inferior to current policy; in other words, they're all proposing to make the country worse. More relevant for most voters, however, is the fact that all four leaders have shown serious shortcomings:

- Trudeau's ethical lapses are well-known, and the "blackface" revelations are yet another reminder of his lack of judgment. He appears to have no vision for the country, being simply on a mission to simultaneously outbid the Tories on financial goodies and pay at least lip service to all of the NDP's priorities.

- Scheer is entirely uninspiring (bringing back ineffective Harper-era policies), tone-deaf on climate (building highways helps reduce emissions?!), and lies about his own work experience (as well as basic arithmetic). His response to the "blackface" episode - immediately going to "racist" and "unfit to be Prime Minister" - reinforced his sophomoric image.

- Singh has shown himself time and time again before the campaign to not know the issues and not have the organizational skills to lead a party. However, he has performed better during the campaign (notwithstanding that some of his announcements were squarely within provincial jurisdiction), which may explain the NDP's recovery.

- May continues to show poor judgment (recall her ill-fated attempt to distinguish between "separatist" and "sovereigntist"), and the Green Party's platform costing turned out to be completely amateurish, exposing the party as wholly unprepared to govern - and perhaps even to be a serious partner for a minority government.

So, um, yeah. Normally, as an economist, I want people to think more about the issues. But this time, the choice is so depressing that we might as well all sit back and go fully into "political junkie" mode, the future of the country be damned.


*Changes made on or after Sept. 25 are only reflected back to the start of the campaign (Sept. 11). These include the re-weighting of standalone regional polls (i.e. regional numbers not part of a national poll) and the Guilbeault baseline adjustment in Laurier--Sainte-Marie. These only make a barely visible (if at all) difference on the graphs.
Posted by Election Watcher at 20:10