The following poll has been added to the model:
Mainstreet's 9/26-28 national poll (national results only; current weight among national polls: 42%)
For a full list of included polls, see previous Projection posts.

This poll is good news for the Liberals, who draw into a rough tie. Unlike Nanos, Mainstreet only sees a very slight and insignificant rise in Green support.

The NDP and the Bloc both rise to their highest level in Mainstreet polling since at least the start of the summer. As a result, the Bloc is at a new high in the seat projection, and the NDP is at a one-month high. 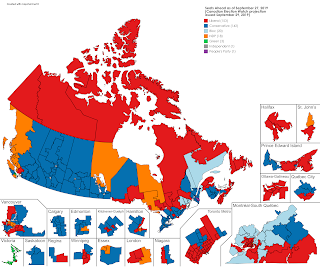 Posted by Election Watcher at 16:25