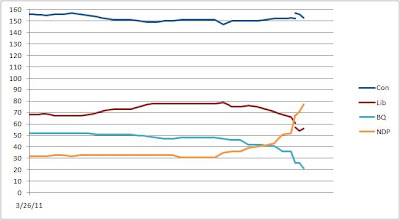 Here is the updated trend graph that I've been promising. The discontinuity in the lines reflects methodological changes. Data in the days before the break has been revised: this is what they would have been without any GTA adjustment (which I have decided to keep at 4%) or change in the vote share formula. This makes it easier to see the parties' true progression.

The story in the past day and a half has of course been the NDP's rise: it gained a whopping 25 seats! However, I don't think it's the main thing to watch going forward - it's fairly likely now that the NDP will finish second, and extremely unlikely that it'll finish first. Indeed, even if the NDP wins the popular vote, it would probably get fewer seats than the Tories, whose vote is very efficient.

Instead, I think that the thing to watch now is the Liberal number in Ontario. The Tories have been flat through the NDP progression because it has made up for losses to the NDP by gains from the Grits in Ontario. However, in the past few days, the Liberal support in Ontario seems to have hit a floor at 28%, which explains the dip in the blue line in the past day. If the Liberals hold on to that 28% of core supporters in Ontario and the NDP numbers from the past two days' polls hold, Harper will be denied a majority. But if the Liberal vote disintegrates in Ontario, the Tories have a good chance of achieving their goal.

Another thing to watch is the Bloc. I'd say they currently have a one-in-three (OK, 1/3 is probably a tad too high) one-in-five chance of losing official party status on Election Day.

Here are the weights on the national polls for the most recent projection. Hopefully this gives you a better sense of how the model works, which can help with understanding the trends:

In bold are the four polls conducted entirely this week. They account for 2/3 of the projection. Polls from last week carry 1/3 of the weight.

Currently, polls with a midpoint date within 2 days of the most recent one (Forum 4/26) are given full weight, which is the square root of the sample size. Polls up to 10 days old are given some weight. As I've indicated a few days ago, I am gradually lowering these thresholds; they were 3 and 12 for most of the campaign, and will be even lower than 2 and 10 for the final projection, which will be almost entirely based on this week's surveys. There is also additional depreciation for polls that are not a firm's most recent one.
Posted by Election Watcher at 06:30