Trends Halfway Through the Campaign 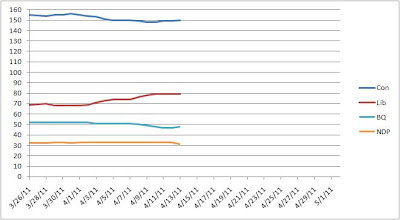 The halfway point of the campaign will occur tonight, at the start of the French debate (if you count from Harper's visit to the GG to the first polls opening in Newfoundland). It's a pretty natural point to take a look at the trends so far, especially given that tomorrow's polling will start containing debate effects.

Picking up where we left after the first quarter of the campaign, the Conservative slide has stopped (but not reversed). However, the Liberals kept rising due to the Bloc's weakening. The NDP, for all the excited talk about it ("It's way up in Québec!" "It's dropping off the map in Ontario!"), has been as flat as Saskatchewan.

The Liberal gains, however, are fragile. If Nanos' latest release is right about the Bloc picking back up in Québec, Ignatieff would be back where he was 10 days ago, below Dion's results.

The national gap between the Tories and Grits has been essentially unchanged at 11% for the past week until the bump today, which is entirely due to the crazy-looking COMPAS poll.

Finally, a note: I've actually been in Asia for the past few weeks, and I'll be traveling back to North America tomorrow. Therefore, there won't be an update tomorrow morning, though I should be able to post tomorrow night, after I get home.
Posted by Election Watcher at 05:42