Trends 3/4 Through the Campaign 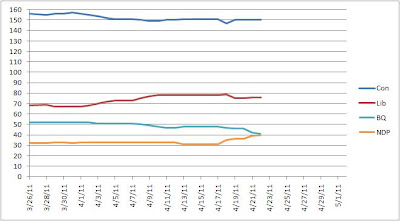 As I have done at the 1/4 and the 1/2 marks of the campaign, I now bring you the trends in my daily projections.

As you can see, the Conservatives have been essentially flat since the first week, just a few seats shy of a majority. The Liberals are down slightly: it's a loss of only two seats since the leaders' debates. However, the more precious loss by the Grits is momentum: they are now at risk of dropping precipitously if the NDP makes gains in Ontario.

The most salient features of the third quarter of the campaign are of course the Bloc's decline and the NDP's rise. The former was already apparent in the first half of the campaign, but accelerated in the past few days. The latter only came about this week. The NDP has yet to overtake the Bloc in third place, but unless their recent surge abruptly reverses, it will happen very soon.

The Conservative advantage over the Liberals has been essentially flat around 11% since April 5. The current uptick is almost exclusively due to the Ipsos poll showing a 22% difference.
Posted by Election Watcher at 00:01