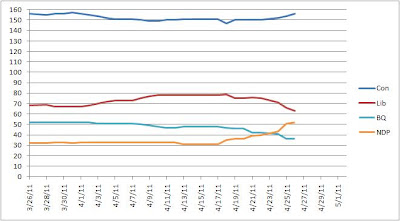 Just five days left in the campaign! The updated trend graph of course shows a steep NDP climb, along with heavy Liberal and Bloc drops. The Conservatives' uptick has been modest, and half of it (3 seats) was caused by the phasing in of a change to the model.

I predicted the flatness of the Conservative seat count in the event of an NDP rise. However, if the Liberals collapse in Ontario, Harper would get a safe majority unless the NDP gets as high in Ontario as it is in Québec - the latter still appears very unlikely.

Two riding polls to report: one by Léger in Lac-Saint-Louis, where Conservative star candidate Larry Smith trails the Liberal incumbent by just 6%, down from 20% in an earlier CROP poll. This Léger poll appears to be dated (the linked writeup only says it was conducted after the debates).

The other poll, conducted 4/18-19, shows Elizabeth May 7% ahead of Gary Lunn in Saanich--Gulf Islands, with the NDP and Liberals both under 10%. Now, this is a poll commissioned by the Green Party and I'm not familiar with this pollster (Oracle). The Conservative support level, 38%, is right around what you'd expect, but one has to be skeptical that May has indeed pushed the NDP and Liberals under 10%. For all these reasons, I will not allow this poll to tip the projection unless there is independent confirmation.
Posted by Election Watcher at 19:46

I surprised we haven't any riding polls out of Ontario this election. They all seem to be from Quebec.

You're right, I've only seen QC and NL riding polls (and BC if you count the Green Party's).

So am I trying to help the Liberals, Conservatives, or NDP? Cuz I've been accused of all three...