Please note that this projection update reflects an additional turnout adjustment against the NDP. Thus, while the NDP is down relative to the previous projection, it is actually up in seats (though almost perfectly flat in votes) as a result of the inclusion of these polls.
Update Aug. 21: I have also updated some riding-level adjustments for star NDP ex-MPs that lost last time and won't be running again (Halifax, Sackville--Preston--Chezzetcook, Ottawa Centre), using a similar approach as in Skeena--Bulkley Valley. These adjustment are very cautious (i.e. smallest plausible rather than "best guess"), and shift just 0.3 seats from the NDP to the Liberals.

These three polls carry fairly contradictory information in all regions. Depending on the poll:
- CONs now tie LIBs in the Atlantic, or LIBs have recovered a sizable lead there.
- CONs are at their lowest or highest point of the summer in QC.
- LIBs continue to enjoy a significant lead in ON, or there is a virtual tie there.
- The SK/MB race is now a CON blowout, or the race has tightened a lot.
- CONs at what might be an all-time peak in AB, or they're below their 2015 levels.
- Either the CONs or the LIBs have opened up a lead in BC.

Things pretty much balance out when you average them. The Liberals and Greens are down slightly, while other parties are up a bit. But really, considering that more than half of the polling average is new, there is remarkably little movement.

If you're new to my 2019 projections, view key interpretive information here.

Due to the change in turnout adjustments, instead of listing which seats flipped, I'll simply provide new maps in the coming days (or later today if I have time). Stay tuned.

That said, you may notice from the provincial breakdown that the NDP gains a seat in NS: it's Sackville--Preston--Chezzetcook. As I mentioned in the early August model post, there's no adjustment in that riding for now due to the lack of a reasonable baseline (Stoffer had represented the riding since its creation in 1997), but much like I recently did for Skeena--Bulkley Valley, I might decide to figure something out here. I did add an adjustment, which flipped the seat back to the Liberals, marginally. But since the adjustment is very cautious, I wouldn't be surprised if the NDP is actually not even competitive in Sackville--Preston--Chezzetcook. 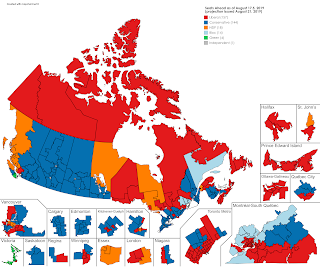 Posted by Election Watcher at 06:32