First Projection for the 2019 Election

Update Aug. 9: Due to small modifications to the model, parts of this post have been revised; the revisions are underlined.

And we're off! Here is the first Canadian Election Watch projection for the 2019 election.

Update Aug. 11: I have revised up the pollster common variance used to derive confidence intervals. The ones below are a bit too narrow - add roughly 5-10 on each side.

This post contains some important information for interpreting these numbers and confidence intervals, as well as links to a fairly detailed description of the methodology. As the post indicates, the seat numbers are the number of ridings where each party is projected ahead, which is different from each party's expected number of seats.

(In case you're wondering about the background colour: I change it periodically according to which party leads the projection, and how close it is to a majority. Right now, it's only very slightly blue because the projection is virtually tied.)

This projection is intended to use all national polls satisfying the inclusion criteria with field dates ending on July 1 or later:

Regional and riding-level polls also factor into the projection; they are listed in this post. If there is a poll that I have missed (and satisfies the inclusion criteria), please let me know!

Here is a map of this projection. Most projections won't be mapped, but since this is the first one, I figure it could be fun to look back in October and marvel at how things have (or haven't) changed. (The model modification caused offsetting NDP-Conservative changes in St. John's East and Desnethé--Missinippi--Churchill River, as well as the Greens adding Cowichan--Malahat--Langford. The map has been updated.) 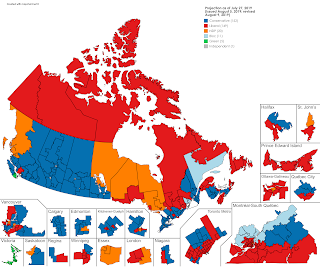 If the situation on election night is anywhere near this projection, it'll be a long and exciting (or nerve-wracking) night! Let's play along for a bit:
- The Conservatives re-establish themselves in the Atlantic, aided by vote splitting between the Liberals and the Greens; Jack Harris' comeback bid falls just short succeeds after a tight three-way race. 10 11 of the 32 Atlantic races are decided by 5 points or less.
- The Liberals pick up 9 seats in QC without increasing their vote share at all, thanks to the NDP's collapse. The Tories pick up 5, while the Bloc falls just short of official party status again. Alexandre Boulerice is the only NDP MP left in La Belle Province.
- ON proves very competitive, with a slight edge to the Liberals. The NDP gains a few seats thanks to Liberal weakness relative to 2015 - its only gains of the night.
- The Tories consolidate their position in MB/SK, and re-take all 4 Liberal seats in AB.
- BC decides who gets the plurality, and thanks to vote splitting on the left (this is the strongest region for both the Greens and the NDP), the Tories win a majority of BC seats on just 35% of the vote, similar to the Liberals in QC. The Greens capture two three more seats, establishing dominance over southern Vancouver Island. Jody Wilson-Raybould wins as an independent, but Jagmeet Singh bites the dust as Burnaby South goes Conservative, thanks to the People's Party petering out; he resigns as NDP leader.
- Government formation is complicated. The Liberals and NDP have exactly half of the seats. So the Tories must get support (or abstention) from either of those parties - Bloc, Greens and independent aren't enough. Similarly, NDP support isn't enough for the Liberals.

Now, I don't expect most of this to happen - see the "actual election" confidence intervals above!

This projection is more generous to the Conservatives than many other websites'. Keep in mind that I make a turnout adjustment of +1% in favour of the Tories, which explains part of the difference. Still, even without this adjustment, I have the Tories up by 3% over the Liberals, more than some other sites. This could be due to my more restrictive poll inclusion criteria (specifically, not using data kept behind a paywall) and/or to my more aggressively discounting older polls (the three most recent polls all show Conservative leads of 3% or more, and have over 60% of the weight).

Also, the Research Co. poll has a regional breakdown that is inconsistent with the top line national numbers: a weighted average of the regional numbers gives a 3-point Tory lead rather than a 3-point Liberal lead. This can happen as response weights may differ when calculating different sets of numbers, but it's rather unusual for the gap to be this big. I went with the regional breakdown, which may also contribute to the polling average being tilted to the Tories.

I do not believe that my actual seat model is more friendly to the Tories than, say, 338Canada's. In fact, with 338's current regional polling averages, I get the Liberals leading in 16 (this figure may have changed; I did not check after the model modification) more seats than the Conservatives rather than 6 more seats.
Posted by Election Watcher at 02:21