Given that pollsters seem to be getting faster at reporting (i.e. they now usually release polls 1-2 days after their conclusion rather than up to 3-4 days), I will move my weekly trend posts from Saturday to Friday. Also, given the coming update to the projection model (in order to incorporate information from regional breakdowns and riding polls), this is a good time to look at the trends given by the current model. 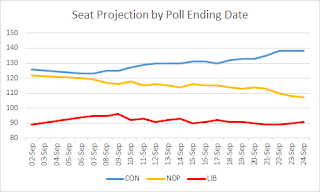 In the past 7 days, the Tories have gained 8 seats, while the NDP dropped as many. Much of these changes occurred in Québec. The Liberals were essentially flat, losing one seat, while the Bloc got on the board with one seat. 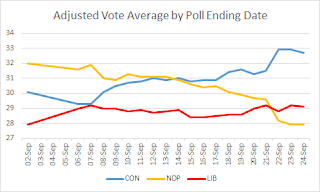 The popular vote graph shows the same tendencies, although here, one clearly sees the effect of the EKOS poll, with a massive bump for the Tories and a massive drop for the NDP on Sept. 22. However, the down trend for the NDP is unmistakable, even without the EKOS poll: it has dropped 2.6% in the past seven days, and would have dropped 1.9% even if EKOS had not reported. Similarly, Tory gains were also clear: of the five pollsters that have reported in the last two days, only Nanos fails to have the Conservatives at least tied for the lead. As for the Liberals, they have been almost entirely flat since Sept. 7.
Posted by Election Watcher at 17:10