I have finally gotten around to plotting the projection trends for this election. I plan on doing this roughly once a week. Two improvements relative to 2011:
- I will plot vote shares (adjusted for turnout) as well as seat counts.
- The plots will be made by last polling date rather than by the date of the projection. In particular, if a poll with earlier field dates if published after a poll with later ones, the graphs will reflect retroactive calculations.

Here's an example to illustrate the second point above: this week, the Nanos polls conducted 9/5-8, 9/6-9 and 9/8-10 were released on 9/9, 9/10 and 9/11 respectively. Then, later on 9/11, the EKOS poll conducted 9/2-8 was released. The trend graphs reflect not only the updated 9/11 projection (for polling up to 9/10), but also corrected 9/9 and 9/10 projections (for polling up to 9/8 and 9/9, respectively). This retroactive adjustment can be informative: for instance, this week, it helps illustrate that the narrative of Conservatives dropping very low early in the week was exaggerated. 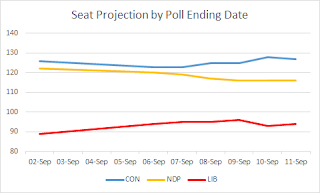 The seat trends this week show a very slow, but steady, NDP decline. The Conservatives followed the NDP trend early in the week, but rebounded late. The Liberals rose in the first part of the week before stabilizing in the last few days. Throughout the week, the Tories were marginally ahead of the NDP for first place; the Liberals have shrunk their gap with the NDP by a third. 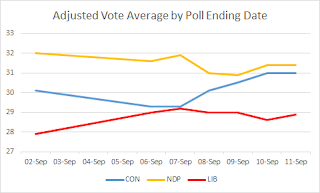 The vote trends are similar to the seat trends. Note that with the retroactive calculations due to the EKOS poll, the Tories actually never fell below the Liberals. It's important to once again note here that these vote shares include a turnout adjustment; without it, the Tories would be third currently (and second in the seat count). The good news for the NDP is that despite the turnout adjustment, it has led the pack throughout the week, but its lead has shrunk from 1.9% a week ago (and a high of 2.6% mid-week) to just 0.4% currently.

Perhaps most importantly: variations so far have been so slight that they can all be explained by statistical noise. So it could be that the real trends since September 2 are boring flat lines...
Posted by Election Watcher at 12:24