This Week's Trends: Flat, Flat, Flat (at least for seats)

Despite a large number of new polls, the seat trends this week have been remarkably flat: from September 11 to September 18, the ranges were: 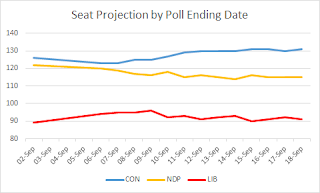 (You may have noticed that some projections were outside of these ranges. This is because these trends are corrected for the timing of poll releases.)

The Conservative uptick observed late last week and the NDP's gentle decline both appear to have stopped.

However, the picture is somewhat different for the popular vote. There, the NDP's decline has continued, dropping it into second place in the adjusted average. The Liberals were also marginally down, meaning that their momentum from before Labour Day has definitely stalled. However, rather than the Tories, it is mainly the Greens that have benefited from these changes: you can see that all three main parties dropped from 9/14 to 9/15 since there were four polls concluded on 9/15 that were all good for the Greens. 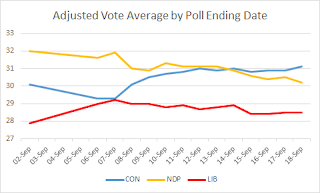 Will next week be as flat? The NDP's statistically significant drop in today's Nanos poll could be an ominous sign for Mulcair (did he lose the debate on the economy?), or it could be the kind of noise that happens 1 time out of 20 even when there's in fact no movement. Stay tuned.
Posted by Election Watcher at 12:23

Thanks - this web page is awesome.

Thanks. Glad you enjoy it!