For new readers: these trends are different - and I would say more meaningful - than the ones you might see elsewhere, since they are retroactively recomputed* when old data becomes available. Thus, my "Trends" posts avoid showing "fake" variations caused by polls coming out with different lags. More details were provided in the first instalment of this series.

Now seems like a good time to take stock of how the campaign was going, before a completely new trend *might* possibly develop. As usual, all numbers in this post reflect my turnout adjustment of CON +1.5, LIB +0.5, NDP -1, GRN -1. 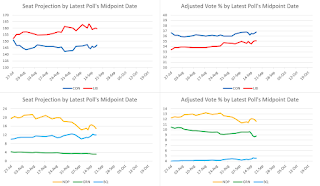 For the main parties, the takeaways are quite boring:

- The Conservatives have been between 35.8% and 36.8% for the entire time. One might think that this could be due to the poll averaging formula putting high weight on old data, but that is far from the case. For example, polls conducted since the campaign started currently have a weight of 97.7% for the national average. The observed variations are well within what a normal amount of random noise can generate with a perfectly flat trend. The seat trend is almost equally unexciting, having been within 3 seats of 145 since July 29.

- The Liberals have also been relatively flat, except for a step up from around 34% to 34.5-35% in late August, when they brought out same-sex marriage and abortion. (The step occurs at the inclusion of a Léger and an EKOS poll, and sticked despite those polls now combining for marginally negative weight in the average.) The seat projection shows a similar step up, from around 155 seats through most of August to around 160 seats in the past 3 weeks. Of course, this step is very small, and only noticeable because so little else has been going on.

Things get more interesting for the smaller parties:

- The NDP went through a very rough period in late August and early September, dropping from 13% to around 11.5%, and from around 20 seats to around 15. In the past week, however, it has stopped the bleeding, right around the threshold of 12 for official party status - the model says just above, but it could well be just below as the remaining NDP ridings are rather atypical and may not move in accordance with provincial swing.

- As I've pointed out in earlier posts, the Greens were on a gentle slide through most of August. They may have partially recovered during the NDP drop, but now that the NDP appears to have steadied itself, the Greens seem to be sliding again. The first week of the campaign has not been kind to Elizabeth May, who positioned herself far to the left at the Maclean's debate (at odds with her campaign slogan), and then with the "separatist" vs. "sovereigntist" argument making her sound rather ridiculous.

- The Bloc appears to have gained some ground vote-wise, but the seat trend has kept bouncing around 10-12. The reason is that the Liberals, their main rivals, have also been gaining ground in QC. (In fact, if I were to look at regional trends, I'd probably find that the aforementioned Liberal step up basically happened in QC.)

Are these trends about to shift dramatically? We'll get a better idea over the next few days, when pollsters will probably be very active.

I end by pointing out that if these trends are more stable than those you might see elsewhere, it might be because (in addition to the recomputations) my poll weighting method attempts to minimize variations due to changes in pollster composition: because pollsters are in the field at different times, their relative weights shift in the average, which can cause spurious variations. One example of how this helps is that in today's projection updates, both 338Canada and the CBC Poll Tracker showed the Liberal seat lead shrinking by 14-15, while mine showed a change of just 5, despite actually weighting recent polls more heavily than the CBC Poll Tracker. This happened (at least partly) because my model assigned negative weight to old Angus Reid polls after the new one came out - and Angus Reid consistently produces poor numbers for the Liberals.

*I did not recompute projections before Aug. 28 to account for the revision in the Lac-Saint-Jean baseline adjustment because the net effect is under 0.1 seats for all parties, and polling averages are unaffected.
Posted by Election Watcher at 22:19