Sadly, work is getting in the way, and I won't be able to post as extensive a guide as I hoped before polls close. The basic thing to remember is that states are typically called immediately only when the margin is greater than 10%. Looking at my state-by-state map, this means that while most states in dark blue/red will be called right away, most (if not all) other states won't. Obama supporters certainly shouldn't freak out if PA isn't called right at 8pm ET, or MI/MN aren't called right at 9pm ET.

We likely won't get a call in any battleground state (tossups and those coloured in the lightest blue or red) until at least 10pm ET. So if you're on the East Coast, you can probably go have a nice long dinner and still not miss any big calls.

If any of PA, MN or MI is called before 10pm ET, Obama is performing at least a little better than expected, and he should probably be viewed as a 95%+ favourite. (Right now, it's more like 90%.) On the other hand, if NC is called for Romney before 10pm ET, then Romney is overperforming, and we're likely in for a long long night.

The Democrats have a decent chance of winning the Senate as early as 11pm ET; if not, it shouldn't be too long a wait after that time. Obama will likely not win the presidency that early, and while I do expect him to win before sunrise tomorrow (most likely between midnight ET and midnight PT), there's a chance that we're headed for long legal battles...

Also, keep an eye out for Marriage Equality propositions in ME, MD and WA, as well as MN's proposal to enshrine discrimination in their state constitution.

Happy viewing!
Posted by Election Watcher at 15:05 No comments: 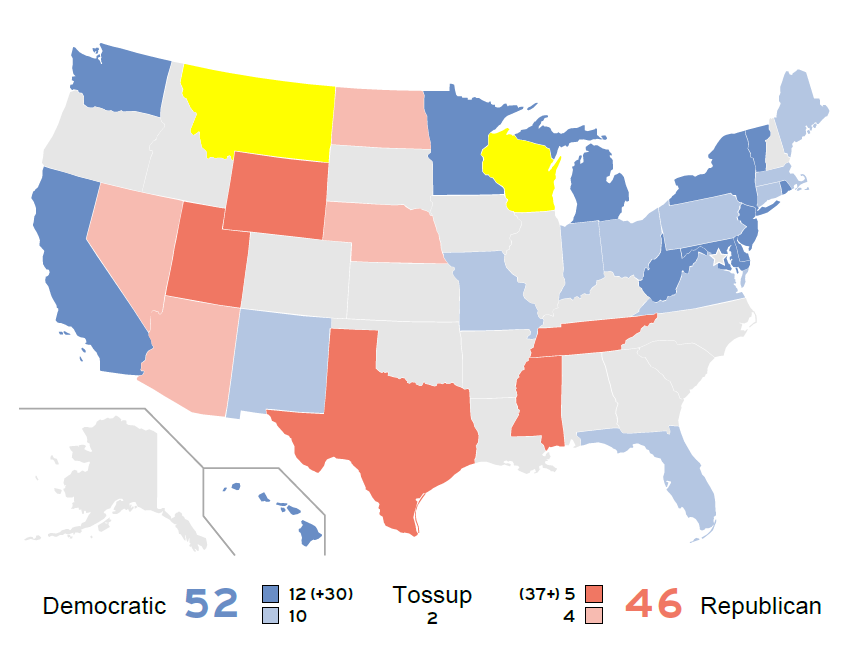 Later today: a guide to election night
Posted by Election Watcher at 10:21 No comments:

2012 US Presidential Election: State by State 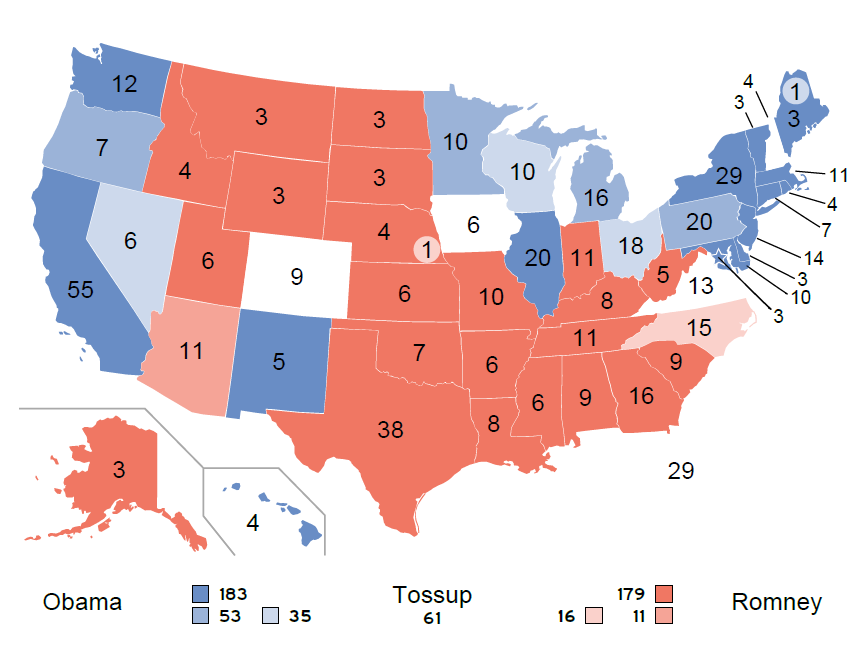 Next up: Senate races
Posted by Election Watcher at 09:37 No comments:

2012 US Election: Summary of National Polls

A small number of pollsters are expected to release their last polls on Election Day. This post may therefore be updated.

I think you can see why I predicted that Obama will win by about 1% :)

Posted by Election Watcher at 01:22 No comments:

Detailed posts coming up overnight or in the morning. But since the polls will be closing in about 20 minutes in Dixville Notch and Hart's Location, NH (these hamlets vote at midnight and are allowed to close their polls when everyone has voted), I'd like to give some approximate projections now.

Obama wins the popular vote by about 1%.
Obama wins between 271 and 347 electoral votes, likely 303.
The Democrats retain a majority in the Senate, with 52-54 seats. (This total includes two independents expected to caucus with Democrats.)
Posted by Election Watcher at 20:41 No comments:

The state of the race has moved very little from three weeks ago - so little that a few times, I thought about writing an update, but gave up since there was basically nothing to add.

In the past few days, things seem to have shifted marginally - maybe 0.5-1% - towards Obama: the latest national polls give him an ever so slight edge (roughly 0.5%), while Romney arguably had the advantage (by 0.5% or less) last week. To my knowledge, 24 different pollsters have released a national poll of likely voters since the Oct. 3 debate that shook up the race. Here are their most recent results, expressed in "Obama minus Romney" terms, from highest to lowest:

Sixteen of these have updated over the past week. By this I mean that as of a week ago, they had released a post-first-debate poll, and they released another one in the past 7 days. The changes in the Obama-Romney gap are:

This national movement was reproduced in many of the swing states. In particular, Virginia, Colorado and New Hampshire, which were virtually perfectly tied as of my last post, now all appear to have an ever so slight Obama lean. Obama may not win all three, but Romney is even less likely to sweep them.

Similarly, in Florida, Romney's already slight advantage has eroded to the point that the state is almost a virtual tie again. The state is definitely in play, and if Obama wins Florida, it's game over for Romney. However, it's unlikely to be the decisive state since there are 303 electoral votes that appear easier to get for Obama than Florida's 29 electoral votes.

Obama's most likely path to 270 is still through Wisconsin, Nevada and Ohio. This trio puts Obama at 271, barring a huge upset in a state like Pennsylvania, Minnesota or Michigan.

Something to keep in mind: in 2008, the polls grossly overestimated Obama's margin in Iowa. Therefore, even though Obama appears to have a small but stubborn lead there, I'm not too confident that he will win. On the other hand, the 2008 polls grossly underestimated Obama's margin in Nevada (as they did Harry Reid's in 2010), so it seems very likely that he'll carry that state even though his polling lead there is also slight. In Colorado as well, the Democrats were underestimated in both 2008 and 2010, though the effect wasn't as big as Nevada.
Posted by Election Watcher at 21:16 1 comment: