(Note: For those of you interested in strategic voting (polls suggest ~30% of you are), see my guide for the advanced polls. It was written Thursday night, and does not take into account polls released subsequently.)

Late last week, the Conservatives appeared to be running away with the election. Now, the Liberals are duking it out with the Tories for the popular vote lead, and if the current trends continue, by the end of next week, they will be fighting for the seat count lead. However, if the NDP is approaching its floor in Ontario, the next 20 seats may be tougher for the Liberals to gain than the 20 it gained this week.

First, a summary of the latest national numbers from the 9 pollsters in the field this past week:

The Liberal vote share ranges from 31% to 35%. However, the 32% results occurred early in the week, and the five of the six most recent polls are within a very narrow range of 33.8% to 35%, with Angus Reid being the outlier at 31%. The last unadjusted projection (issued before Angus Reid) pegged the Liberals at 33.1%, meaning that if their late-week numbers are sustained, the Liberals will keep gaining in the projection.

The NDP vote share ranges from 24% to 26% in six polls, while Mainstreet and EKOS peg it at 20%. The last unadjusted NDP poll average was 23.9%. It will be interesting to see if its slide has stopped, as the Nanos tracking suggests, or if it is still ongoing, as the EKOS tracking suggests.

The adjusted vote share, which includes a turnout adjustment where Conservative supporters are roughly 10% more likely to vote than other electors, still favours the Tories, but the gap has shrunk in a hurry: 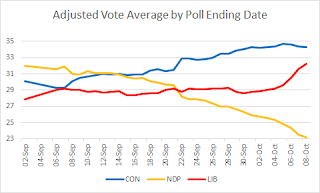 A week ago, the Conservative lead of 5.5 points was at its widest of the campaign. Now, this lead is down to 2.1 points, a decrease of 62%. (Without the turnout adjustment, the lead has been completely wiped out, and the Liberals are marginally ahead.)

We can see that during almost all of September, NDP losses appeared to go to the Tories. Most likely some of it actually went to the Liberals, who probably lost some centre-right voters to the Conservatives. However, in the past 7 days, the Liberals gained 3.4 points thanks to a 2.7-point drop in NDP support (and a 0.6-point drop in Green support). The most obvious explanation - and likely the right one, though we can only speculate - is that these were "change" electors deciding that Trudeau is more likely than Mulcair to replace Harper.

All this of course has an impact on the seat projection: 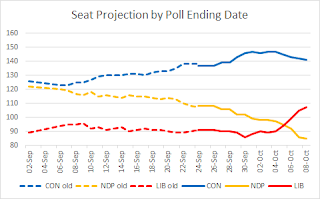 The dotted lines refer to projections made before the inclusion of riding polls and sub-regional breakdowns.

The NDP is now lower than the Liberals have ever been in the past month. The Conservatives have come off their highs due to Liberal strength in Ontario, and their chances of a majority have roughly halved, from about 10% to about 5%. The Liberal chances of winning have increased roughly five-fold, from 2-3% to 10-15%. (All these probabilities are if the election had taken place mid-week last week or this week - the uncertainty for actual election day is of course greater.)

I will write a post in the coming week about where these probability estimates come from. I believe that some of the other ones out there overstate the precision of seat projections, but The Globe's Election Forecast gets reasonable results (it shows a higher Liberal probability of winning because it does not include a turnout adjustment).

Below is a brief region-by-region overview:

- Atlantic: The Liberal vote share is roughly double the (very similar) NDP and Conservative support levels. It is difficult to know how things are distributed by province, but whatever happens, the Liberals should win 20-27 out of 32 seats here.

- Québec: A complete mess. The Bloc usually has problems with turnout, so it will have trouble coming out on top of this four-way race. The NDP probably still has a small edge over the Liberals, but don't be surprised if it goes away completely. The wild card is the Tories: are they at 17-23%, as phone/online polls suggest, or 23-27% as IVR polls suggest? Commentator Jean Lapierre believes that some Conservative supporters in Québec feel ashamed to admit that they will vote Tory, so perhaps the IVR polls are more correct. My adjusted average currently shows NDP 29%, LIB 25%, CON 24%, BQ 19%.

No regional breakdown has been offered in Québec for several weeks. However, Jean-Marc Léger says that the NDP is 2nd everywhere: in Montréal to the Liberals, in Quebec City to the Tories, and in the countryside to the Bloc. If that is borne out, the current NDP projected seat count of 41 would be a gross overestimate, and the Bloc might regain official party status.

- Ontario: The polls this week show:

Unanimous agreement: if everyone turns out, Ontario is currently red. (Well, Angus Reid shows a tie, but Angus Reid has been low on the Liberals in ON throughout the campaign.) The Liberals were at 37-39% early in the week. Have they increased to the low 40s? This is THE question for the next few days. If so, they have a real chance of winning the election. But if they remain in the high 30s, it probably won't be enough. My adjusted average is currently skeptical, showing LIB 38%, CON 37%, NDP 20%. Look for a continued Liberal surge in the projection if today's Mainstreet, Innovative and Nanos numbers hold.

- MB/SK: Roughly speaking, these are to the Tories what the Atlantic provinces are to the Liberals. The bulk of tight races are Conservative/NDP ones in Regina and Saskatoon. The Liberals should get a healthy delegation from Winnipeg.

- AB: The NDP has dropped dramatically here, from 25-30% in late August to around 15% now. Proportionally, this is as dramatic a decline as it suffered in Québec! Some of the vote went back to the Tories, while some went to the Liberals, who are now above 20% in most polls. The current projection probably overestimates the Conservative seat count here: there's noise from insider pollsters that the Liberals are, in fact, poised to make gains, but there are no publicly available hard numbers showing that. Riding polls in the last week of the campaign may provide some clarity.

- BC: It's a three-way tie in the unadjusted numbers here, giving the Tories a marginal lead in the adjusted average: CON 32%, NDP 29%, LIB 29%. The Liberal vote is inefficient to the extreme here: it is very concentrated in a small number of ridings, which leaves most other ridings around 20-25%, not enough to win. As a result, the Liberals are stuck at 7 projected seats despite battling for first place in the vote share. The Greens remain stuck at 9-10%, though what we really need to figure out if they can win a second seat is a riding poll in Victoria - none has yet been publicly released.
Posted by Election Watcher at 18:30

Thanks for the great analysis, If you want change VOTE Strategically, check threehundredeight.com for polls in your riding.

I'm glad you enjoyed the analysis. I'd like to correct your statement: threehundredeight.com does not provide riding polls; rather, it provides projections for each riding. Also, it did not do particularly well in 2011, as you can see here:
http://cdnelectionwatch.blogspot.ca/2011/05/model-performance-comparison-with-other.html

People may be better off with the following sources:
- My guide to strategic voting:
http://cdnelectionwatch.blogspot.ca/2015/10/guide-to-strategic-voting-advanced.html
- Too Close To Call's riding projections: tooclosetocall.ca.
- Comprehensive list of riding polls:
https://en.wikipedia.org/wiki/Opinion_polling_in_the_Canadian_federal_election,_2015_by_constituency