Here are the weekly trends (a day early, since I'll post the final trends in 3 days anyway). 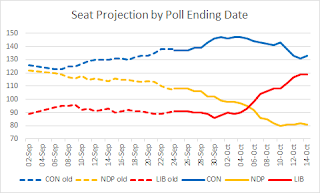 (In case you're new to this blog, the dotted lines refer to projections that did not take riding polls and sub-regional breakdowns into account.)

After flirting with the 150-seat level in the first few days of October, the Tories started pulling back last week, and their decline accelerated this week. Meanwhile, the Liberals have continued their steep ascent. Note that the only polls ending on Oct. 13 and 14 are the rolling EKOS and Nanos polls, so it is too early to say that the Conservative fall and/or the Liberal rise have stopped.

The NDP, however, has been essentially flat for five days, so it appears that it has settled around 80 seats. In Québec, the NDP stopped its slide just before disaster: with a current poll average just under 30%, it still stands to win roughly half of the seats in Québec. However, Quebecers may not have said their last word yet.

The vote share trends (adjusted for turnout) tell a similar story, but the Liberals have been ahead for a few days: 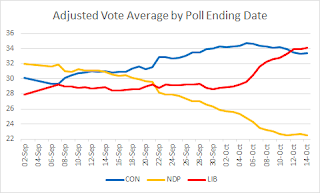 It's interesting to note that despite being about 6 full points lower than where the Liberals were during most of September, the NDP is only about 10 seats lower. This is almost entirely due to Québec: elsewhere in the country, the NDP is projected to win only 40 seats, about the same (especially if you consider that the total number of seats has increased) as it did in 2008, before the orange wave. Thus, outside Québec, the NDP is almost down to its base; in Québec, is 28-30% its new base? We may find out in the negative in the next few days; if not, we likely won't find out before the next election...
Posted by Election Watcher at 19:23