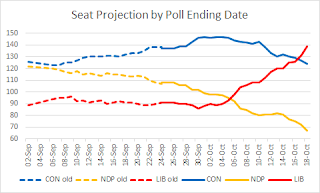 For those of you that are new, the dotted lines indicate that those projections were made without taking into account riding polls and sub-regional breakdowns.

As you can see, in the past 2 weeks, the Liberals have gained seats at a fairly consistent rate of 3-4 seats per day. The Tories have been losing 1-2 seats per day, also fairly consistently. The NDP, however, has had two periods of steep drops with an interlude in between: for a while, it appeared as though the NDP stopped the bleeding at around 80 seats, but the down trend then resumed with a vengeance. 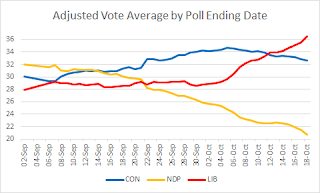 The vote shares tell a similar story, though the Tories have lost only 2 points in the past 2 weeks. The Liberal surge, especially in Ontario, hurt the Conservatives more than the drop in their own support (i.e. if it were instead the NDP that had gained support, the Tories would not have lost as many seats). More remarkable is the fact that the NDP has lost over 1/3 of its support since Labour Day.

Finally, I should also mention that the Greens have lost roughly 1 point in the past 2 weeks, probably as progressive voters switched in order to "make their vote count." This is why Elizabeth May pleaded for people to vote their conscience.
Posted by Election Watcher at 21:37