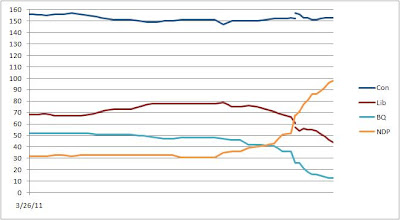 Here is the complete trend graph for this campaign. As previously explained, the discontinuity is due to a change in methodology, so the continuous parts of the lines reflect actual variations in the parties' fortunes. Also, as indicated in the main post about the final projection, the numbers plotted as the final point of each line differ from the final projection, which adds a step in the data crunching.

We can see that the Conservatives started the campaign barely in majority territory, but fell out of it due to a strong start by Ignatieff. (Yes, the Grits were actually doing well in the first week. Weird, huh?) For most of the campaign thereafter, they were teetering between a minority and a majority (if you mentally shift the Tory line before the discontinuity up). Throughout the NDP rise, the Conservatives were quite stable, losing just a handful of seats, as I had predicted. This lands them just outside majority territory in the final projection.

The NDP was in the low 30s for the first 60% of the campaign. It was a few points higher in Québec than in 2008, but that wasn't enough for any seat gains. In the rest of Canada, the NDP was actually lower than its 2008 results through the first half of the campaign! As the NDP wave hit Québec, its projected seat count started increasing at a moderate pace until it got to around 50, just 6 days ago. Then it hit the zone where a big chunk of Québec seats swing almost in unison, and the NDP seat count skyrocketed. The rest is history.

It's striking how the Liberal and the Bloc lines are almost parallel, though in the first half of the campaign, the Grits were either on the rise or flat, while the Bloc was already trending downward. While Gilles Duceppe's drop can be at least partly attributed to an uninspired and ill-conceived campaign, Ignatieff didn't do too bad of a job. Unfortunately for him, Jack Layton was much better, and enthusiasm for the NDP crowded out the Liberals.
Posted by Election Watcher at 04:38