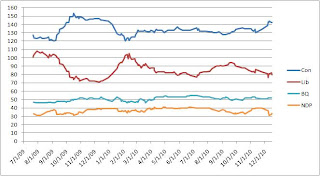 Here's the evolution of seat projections over this blog's 17-month-or-so existence. Below is a summary of the year from the perspective of each of the major parties.

Conservative Party: Before prorogation, the end of 2009 was a sweet one for the Tories. Although they weren't in majority territory, they were very close and slightly above their 2008 election results. On December 30, however, Stephen Harper announced that Parliament would be prorogued until early March, and what political observers would have asked were they not on vacation is whether this second prorogation would dent the Conservatives' popularity. Well, the answer came quickly in the new year, as polls immediately pointed to a tight race between the Tories and the Grits. What had been a 70+ seat lead quickly shrank to a 20-seat edge, and some polls even put the Liberals marginally ahead. The Conservatives recovered somewhat during the Olympics, and were then flat flat flat for nine months in the low 130s - perhaps fittingly given the lack of big news on the federal scene. However, the last month of the year saw, for reasons that are somewhat murky, a further recovery in Tory fortunes, and Harper ends the year only marginally behind where he was a year ago.

Liberal Party: The furor over prorogation obviously benefited the Liberals at the start of the year, and as the Tories partially recovered during the Games, the Grits gave back some of their gains. However, through the spring, even as the Conservatives were going nowhere, the Liberals kept sliding slowly, but surely. By mid-year, the Grits had coughed up almost all of their prorogation gains. The summer, however, reversed that trend, and by Labor Day, fresh from his BBQ tour, Ignatieff was just short of where he was during the prorogation episode. Unfortunately for the Liberals, as temperatures cooled, so did Canadians' sentiment toward their leader, and they end the year on a low, still ahead, but only marginally, of where they were in late 2009.

Bloc: The Bloc dipped a little early in 2010 due to the Liberals' strength. But as the Liberals slid during the spring, the Bloc recovered and even gained ground, staying above 50 seats for the most part through the rest of the year. 2010 was smooth sailing for Duceppe, as he had no real competition in Québec, and the situation seems unlikely to change any time soon.

NDP: For most of the year, the NDP's fortunes were inversely related to the Liberals'. During the good Grit stretches, the Dippers were in the low to mid 30s, while during Grit skids, the NDP hovered around 40. However, the late-year Tory surge has hurt Layton even as it weakened Ignatieff. Is this a temporary blip, or the beginning of the end of Layton's leadership?
Posted by Election Watcher at 14:42