Trend from the Past 20 Months 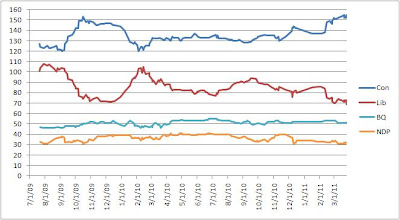 The start of the 2011 campaign seems to be a good time to review the trends in seat projections since the creation of this blog about 20 months ago.

As you can see, the current Conservative lead is as large as it has been since July 2009. Ever since the prorogation fallout in early 2010, the Tories have been on a generally upward path (although they were flat for most of 2010). The Grits have been generally falling since then, save for a bump during the summer of 2010 that got completely wiped out over the fall. The Bloc has been stable around 50 seats, while the NDP has dropped from around 40 during most of 2010 to the low-to-mid 30s.

I will, of course, start a new graph for this campaign, and hope to post chart updates every week.
Posted by Election Watcher at 07:29