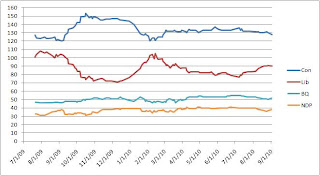 It's been a while since I last updated the projection trends (as well as the maps, but those will have to wait), so I thought that now might be a good time to do it as BBQ season ends.

The graph shows the evolution of the aggregate projection since the birth of this blog in July 2009. Picking up the narrative from the last update in December 2009, we see that prorogation brought the Tories down from near majority seat counts and produced a major spike in the Liberal numbers, cutting the gap between the two main parties to as little as 16 seats as the Olympics were getting started. By the time the Olympics were ending, however, the Tories recovered to above 130 seats, while the Grits were down to the low 90s.

In the spring, the Liberals continued their gentle slide, but those seats did not go to the Conservatives. Rather, it is the Bloc and the NDP that strengthened their position thanks to Ignatieff's continued weakness. The Tories were for the most part mired in the low 130s, never recovering to their Fall 2009 levels.

Finally, during the summer, Liberal fortunes reversed as Ignatieff finally started getting positive press after more than a year of unflattering reports. The Grits drew from all three other parties. Due to their previous rise, the Bloc and the NDP remain strong, but save for the prorogation episode, the Conservatives haven't been this low since around Labour Day 2009.

Where do things go from here? The first thing to note is that things are currently in flux. Only two firms, EKOS and Harris-Decima, have released polling from the second half of August, so the current projection is a compromise between mid-summer numbers more favourable to the Tories and the latest numbers more favourable to the Grits. As other pollsters get back into action, the Liberal seat count could quickly slide back to the low 80s or approach 100.

Once that's done, my guess is that things will be fairly stable, as they have been since March. I maintain my December prediction that the Liberals will stay above their Fall 2009 lows, but are unlikely to pass the Tories in 2010, except during a general election campaign (which now looks unlikely), where anything could happen.

Nevertheless, it'll be interesting to keep an eye on the numbers this Fall: the closer the Liberals get to the Conservatives, the more likely Budget 2011 will be rejected, which would probably lead to an April 2011 election. However, even if Ignatieff pulls even with Harper, he may hesitate to provoke an election given what happened last fall. Moreover, if the Grits actually manage to pass the Tories, that may mean that either the NDP or the Bloc would be much weakened, which could prompt one of them to support the Government or abstain.

Scenarios where Harper would call an election on his own in the next six months seem rather remote: his party has not been above 140 all year, and their spells above 133 have been limited to at most one week. But if the economic outlook worsens quickly, the PM may decide to go sooner rather than later and cut his losses.
Posted by Election Watcher at 13:07