While the Canadian federal political scene has been, all things considered, fairly calm these past few weeks, things have been heating up for the midterm elections here in the United States. Most prognosticators, of which Nate Silver at FiveThirtyEight is probably the most sophisticated statistically, are predicting about a 15-seat majority for the Republicans in the House (equivalently, roughly a 30-seat gap between the GOP and the Dems) and the Democrats barely holding onto the Senate. The picture below shows my own Senate ratings. 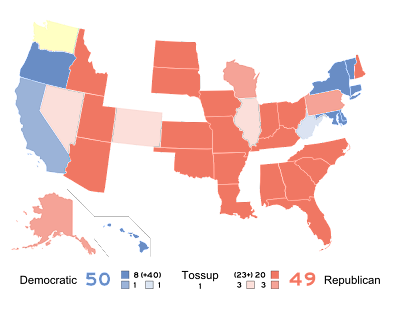 Then, there are 4 seats where the outcome seems fairly certain (normally, these should be carried by mid to high single digits), but a perfect storm could create an upset. CA should remain Democratic, while AK should be carried by either the Republican candidate, or the Republican incumbent running as a write-in independent (but who will stay in the GOP caucus is re-elected). Meanwhile, PA and WI are likely pickups for the GOP. With these seats, the count is 49 Democrats and 46 Republicans.

Finally, there are 5 seats, all currently held by Democrats, where the outcome is very much in doubt. Unless they can win CA or poach one of the existing Democratic caucus members (like Joe Lieberman or Ben Nelson), the Republicans need a clean sweep of these states to take control. The GOP currently holds an edge in IL, NV and CO. Nevada is of particular interest, since Senate Majority Leader Harry Reid could lose his seat. Also, WA, where the Democratic incumbent has been favored throughout the race, has recently become a pure tossup. On the other hand, the popular Democratic candidate and current governor is now ahead in WV, despite the overwhelming unpopularity of President Obama in his state.

My best guess for the result in the Senate is 51 Democrats and 49 Republicans. Basically, I get 50.5-49.5 by splitting the pure tossup of Washington state, and round up for the Democrats as they have fewer questionable seats than the GOP in that count.

If WV and CA stay Democratic, then barring some defection, the Senate will remain Democratic as Vice President Joe Biden casts the tie-breaking votes. But if one of those two states flips, WA becomes determinant. That would potentially make for a long period of uncertainty: the vote there is likely to be extremely close, and the state, which votes almost entirely by mail, only requires that ballots be postmarked by Election Day.