Taken together, these polls show a fairly static race between the Tories and Liberals. Abacus and Ipsos show the NDP losing some ground. Abacus has the Bloc up significantly since its last poll, but since that poll is over a week old and other polls have shown a Bloc increase since then, this does not shift the projection much. Abacus also has the Liberals jumping out to a lead in BC, but Ipsos shows them falling further behind, so there is still no clarity there (though Ipsos BC numbers cannot be included in the projection).

Accordingly, the NDP is slightly down in the projection, which is mostly stable.

Here is, belatedly, the map that I promised for last night. Of course, the map will be updated again when I post the final projection tonight! 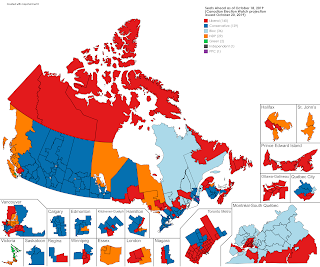 Posted by Election Watcher at 16:39