The following poll has been added to the model:
Campaign Research's 8/9-13 national poll (current weight among national polls: 41%)
The model puts a high weight on this poll due to the next most recent poll being a full week older. Campaign Research's July poll has a weight of -17%.
For a full list of included polls, see previous Projection posts.

This poll was good for the Liberals in Atlantic Canada, but, crucially, not so good for them in ON, where they lead, but not by much. It also breaks out MB and SK, showing a very large gap between the two (even larger than in 2015, to the point that the Conservatives are stronger in SK than AB), but the sample sizes there are tiny, so there are no provincial adjustments yet for the MB/SK region. Finally, this is a weak poll for both the Liberals and the Conservatives in QC, which leads to BQ gains in the projection.

Updates 8/15: Map added, and slight projection change (without any lead change) due to changes to baseline adjustments in Thunder Bay--Superior North and due to this poll:
Mainstreet's 8/9-10 Victoria poll
Update 8/16: Added a potential House of Commons seating chart.

Projection as of the latest national poll (midpoint: August 11)

If you're new to my 2019 projections, view key interpretive information here. 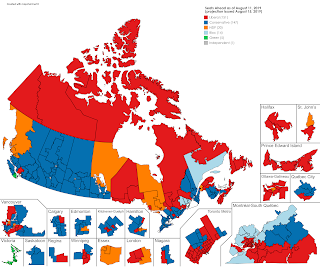 Posted by Election Watcher at 05:56